Docker's default storage driver on most Ubuntu installs is AUFS.

Don't use it. Use Overlay instead. Here's why.

First, some background. I'm testing the performance of the basic LAMP stack on POWER. (LAMP is Linux + Apache + MySQL/MariaDB + PHP, by the way.) To do more reliable and repeatable tests, I do my builds and tests in Docker containers. (See my previous post for more info.)

Each test downloads the source of Apache, MariaDB and PHP, and builds them. This should be quick: the POWER8 system I'm building on has 160 hardware threads and 128 GB of memory. But I was finding that it was only just keeping pace with a 2 core Intel VM on BlueMix.

Why? Well, my first point of call was to observe a compilation under top. The header is below.

Over 70% of CPU time is spent in the kernel?! That's weird. Let's dig deeper.

My next port of call for analysis of CPU-bound workloads is perf. perf top reports astounding quantities of time in spin-locks:

perf top -g gives us some more information: the time is in system calls. open() and stat() are the key culprits, and we can see a number of file system functions are in play in the call-chains of the spinlocks. 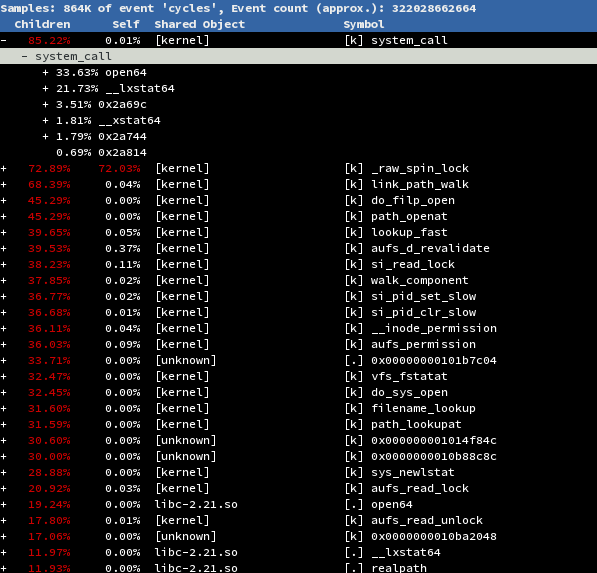 Why are open and stat slow? Well, I know that the files are on an AUFS mount. (docker info will tell you what you're using if you're not sure.) So, being something of a kernel hacker, I set out to find out why. This did not go well. AUFS isn't upstream, it's a separate patch set. Distros have been trying to deprecate it for years. Indeed, RHEL doesn't ship it. (To it's credit, Docker seems to be trying to move away from it.)

Wanting to avoid the minor nightmare that is an out-of-tree patchset, I looked at other storage drivers for Docker. This presentation is particularly good. My choices are pretty simple: AUFS, btrfs, device-mapper or Overlay. Overlay was an obvious choice: it doesn't need me to set up device mapper on a cloud VM, or reformat things as btrfs.

It's also easy to set up on Ubuntu:

Having moved my base container across, I set off another build.

The first thing I noticed is that images are much slower to create with Overlay. But once that finishes, and a compile starts, things run much better:

...then drop AUFS and switch to Overlay today.