Sigreturn Oriented Programming - a general technique that can be used as an exploit, or as a backdoor to exploit another vulnerability.

Okay, but what is it?

Yeah... Let me take you through some relevant background info, where I skimp on the details and give you the general picture.

In Linux, software interrupts are called signals. More about signals here! Generally a signal will convey some information from the kernel and so most signals will have a specific signal handler (some code that deals with the signal) setup.

This is the rough mental picture you should have: 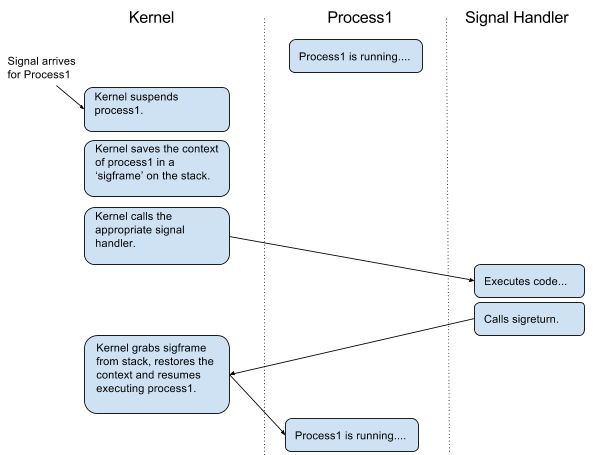 Okay... but you still haven't explained what SROP is..?

The above process was designed so that the kernel does not need to keep track of what signals it has delivered. The kernel assumes that the sigframe it takes off the stack was legitimately put there by the kernel because of a signal. This is where we can trick the kernel!

If we can construct a fake sigframe, put it on the stack, and call sigreturn, the kernel will assume that the sigframe is one it put there before and will load the contents of the fake context into the CPU's registers and 'resume' execution from where the fake sigframe tells it to. And that is what SROP is!

Well that sounds cool, show me!

Firstly we have to set up a (valid) sigframe:

By valid sigframe, I mean a sigframe that the kernel will not reject. Luckily most architectures only examine a few parts of the sigframe to determine the validity of it. Unluckily, you will have to dive into the source code to find out which parts of the sigframe you need to set up for your architecture. Have a look in the function which deals with the syscall sigreturn (probably something like sys_sigreturn() ).

For a real time signal on a little endian powerpc 64bit machine, the sigframe looks something like this:

The most important part of the sigframe is the context or ucontext as this contains all the register values that will be written into the CPU's registers when the kernel loads in the sigframe. To minimise potential issues we can copy valid values from the current GPRs into our fake ucontext:

For some reason the sys_rt_sigreturn() on little endian powerpc 64bit checks the endianess bit of the ucontext's MSR register, so we need to set that:

Fun fact: not doing this or setting it to 0 results in the CPU switching from little endian to big endian! For a powerpc machine sys_rt_sigreturn() only examines ucontext, so we do not need to set up a full sigframe.

Secondly we have to put it on the stack:

When the kernel receives the sigreturn call, it looks at the userspace stack pointer for the ucontext and loads this in. As we have put valid values in the ucontext, the kernel assumes that this is a valid sigframe that it set up earlier and loads the contents of the ucontext in the CPU's registers "and resumes" execution of the process from the address we pointed the NIP to.

Obviously, you need something worth executing at this address, but sadly that next part is not in my job description. This is a nice gateway into the kernel though and would pair nicely with another kernel vulnerability. If you are interested in some more in depth examples, have a read of this paper.

So how can we mitigate this?

Well, I'm glad you asked. We need some way of distinguishing between sigframes that were put there legitimately by the kernel and 'fake' sigframes. The current idea that is being thrown around is cookies, and you can see the x86 discussion here.

For a more in-depth explanation of SROP, click here.