When writing C programs in userspace there is libc which does so much of the heavy lifting. One important thing libc provides is portability in performing syscalls, that is, you don't need to know the architectural details of performing a syscall on each architecture your program might be compiled for. Another important feature that libc provides for the average userspace programmer is highly optimised routines to do things that are usually performance critical. It would be extremely inefficient for each userspace programmer if they had to implement even the naive version of these functions let alone optimised versions. Let us take memcmp() for example, I could trivially implement this in C like:

However, while it is incredibly portable it is simply not going to perform, which is why the nice people who write libc have highly optimised ones in assembly for each architecture.

When writing code for the Linux kernel, there isn't the luxury of a fully featured libc since it expects (and needs) to be in userspace, therefore we need to implement the features we need ourselves. Linux doesn't need all the features but something like memcmp() is definitely a requirement.

There have been some recent optimisations in glibc from which the kernel could benefit too! The question to be asked is, does the glibc optimised power8_memcmp() actually go faster or is it all smoke and mirrors?

With things like memcmp() it is actually quite easy to choose datasets which can make any implementation look good. For example; the new power8_memcmp() makes use of the vector unit of the power8 processor, in order to do so in the kernel there must be a small amount of setup code so that the rest of the kernel knows that the vector unit has been used and it correctly saves and restores the userspace vector registers. This means that power8_memcmp() has a slightly larger overhead than the current one, so for small compares or compares which are different early on then the newer 'faster' power8_memcmp() might actually not perform as well. For any kind of large compare however, using the vector unit should outperform a CPU register load and compare loop. It is for this reason that I wanted to avoid using micro benchmarks and use a 'real world' test as much as possible.

The biggest user of memcmp() in the kernel, at least on POWER is Kernel Samepage Merging (KSM). KSM provides code to inspect all the pages of a running system to determine if they're identical and deduplicate them if possible. This kind of feature allows for memory overcommit when used in a KVM host environment as guest kernels are likely to have a lot of similar, readonly pages which can be merged with no overhead afterwards. In order to determine if the pages are the same KSM must do a lot of page sized memcmp().

Performing a lot of page sized memcmp() is the one flaw with this test, the sizes of the memcmp() don't vary, hopefully the data will be 'random' enough that we can still observe differences in the two approaches.

My approach for testing involved getting the delta of ktime_get() across calls to memcmp() in memcmp_pages() (mm/ksm.c). This actually generated massive amounts of data, so, for consistency the following analysis is performed on the first 400MB of deltas collected.

The host was compiled with powernv_defconfig and run out of a ramdisk. For consistency the host was rebooted between each run so as to not have any previous tests affect the next. The host was rebooted a total of six times, the first three with my 'patched' power8_memcmp() kernel was booted the second three times with just my data collection patch applied, the 'vanilla' kernel. Both kernels are based off 4.13-rc3.

Each boot the following script was run and the resulting deltas file saved somewhere before reboot. The command line argument was always 15.

The guest kernel was a pseries_le_defconfig 4.13-rc3 with the same ramdisk the host used. It booted to the login prompt and was left to idle.

A variety of histograms were then generated in an attempt to see how the behaviour of memcmp() changed between the two implementations. It should be noted here that the y axis in the following graphs is a log scale as there were a lot of small deltas. The first observation is that the vanilla kernel had more smaller deltas, this is made particularly evident by the 'tally' points which are a running total of all deltas with less than the tally value. 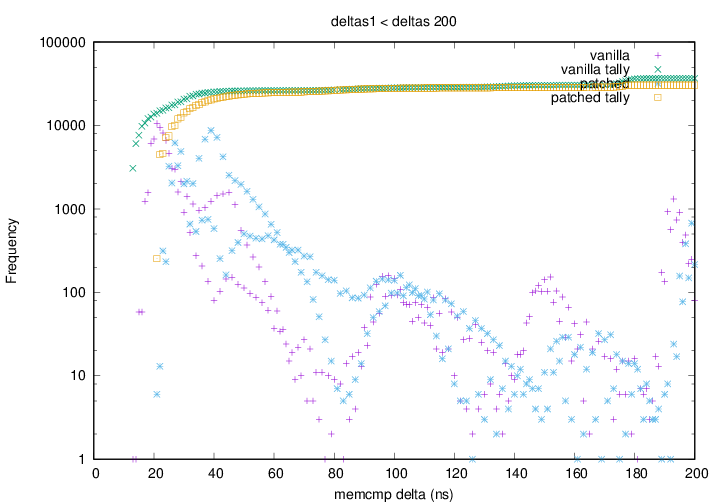 Graph 1 depicting the vanilla kernel having a greater amount of small (sub 20ns) deltas than the patched kernel. The green points rise faster (left to right) and higher than the yellow points.

Still looking at the tallies, graph 1 also shows that the tally of deltas is very close by the 100ns mark, which means that the overhead of power8_memcmp() is not too great.

The problem with looking at only deltas under 200ns is that the performance results we want, that is, the difference between the algorithms is being masked by things like cache effects. To avoid this problem is may be wise to look at longer running (larger delta) memcmp() calls.

The following graph plots all deltas below 5000ns - still relatively short calls to memcmp() but an interesting trend emerges: 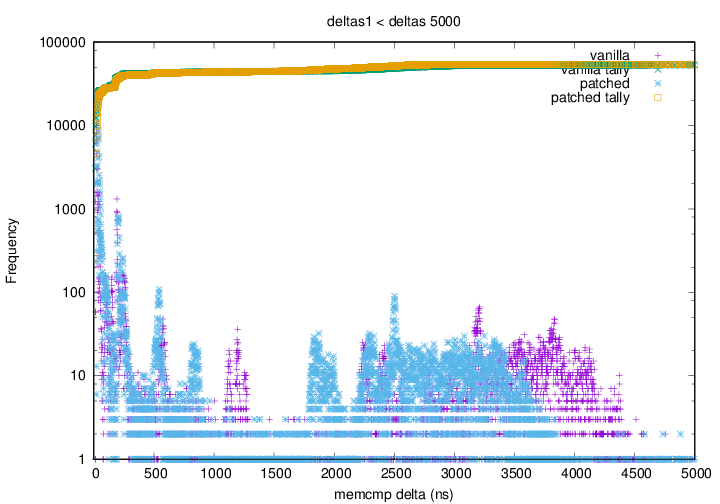 Graph 2 shows that above 500ns the blue (patched kernel) points appear to have all shifted left with respect to the purple (vanilla kernel) points. This shows that for any memcmp() which will take more than 500ns to get a result it is favourable to use power8_memcmp() and it is only detrimental to use power8_memcmp() if the time will be under 50ns (a conservative estimate).

It is worth noting that graph 1 and graph 2 are generated by combining the first run of data collected from the vanilla and patched kernels. All the deltas for both runs are can be viewed separately here for vanilla and here for patched. Finally, the results from the other four runs look very much identical and provide me with a fair amount of confidence that these results make sense.

It is important to separate possible KSM optimisations with generic memcmp() optimisations, for example, perhaps KSM shouldn't be calling memcmp() if it suspects the first byte will differ. On the other hand, things that power8_memcmp() could do (which it currently doesn't) is check the length parameter and perhaps avoid the overhead of enabling kernel vector if the compare is less than some small amount of bytes.

It does seem like at least for the 'average case' glibcs power8_memcmp() is an improvement over what we have now.

A second round of data collection and plotting of delta vs position of first byte to differ should confirm these results, this would mean a more invasive patch to KSM.