Recently a set of 8 vulnerabilities were disclosed for the grub bootloader. I found 2 of them (CVE-2021-20225 and CVE-2021-20233), and contributed a number of other fixes for crashing bugs which we don't believe are exploitable. I found them by applying fuzz testing to grub. Here's how.

This is a multi-part series: I think it will end up being 4 posts. I'm hoping to cover:

We've been looking at fuzzing grub-emu, which is basically most parts of grub built into a standard userspace program. This includes all the script parsing logic, fonts, graphics, partition tables, filesystems and so on - just not platform specific driver code or the ability to actually load and boot a kernel.

Previously, we talked about some issues building grub with AFL++'s instrumentation:

It also doesn't work with afl-gcc.

We tried to trick configure:

The problem is the module linkage that I talked about in part 1. There is a link stage of sorts for the kernel (kernel.exec) and each module (e.g. disk.module), so some AFL support code gets linked into each of those. Then there's another link stage for grub-emu itself, which also tries to bring in the same support code. The linker doesn't like the symbols being in multiple places, which is fair enough.

There are (at least) 3 ways you could solve this. I'm going to call them the hard way, and the ugly way and the easy way.

The hard way: messing with makefiles

We've been looking at fuzzing grub-emu. Building grub-emu links kernel.exec and almost every .module file that grub produces into the final binary. Maybe we could avoid our duplicate symbol problems entirely by changing how we build things?

I didn't do this in my early work because, to be honest, I don't like working with build systems and I'm not especially good at it. grub's build system is based on autotools but is even more quirky than usual: rather than just having a Makefile.am, we have Makefile.core.def which is used along with other things to generate Makefile.am. It's a pretty cool system for making modules, but it's not my idea of fun to work with.

But, for the sake of completeness, I tried again.

Basically, in the makefile this ends up being (e.g.):

You can't just collect the sources and build them into grub-emu - they all have to built with different CFLAGS! So instead I spent some hours messing around with the build system. Given some changes to the python script that converts the Makefile.*.def files into Makefile.am files, plus some other bits and pieces, we can build grub-emu by linking the object files rather than the more-processed modules.

The build dies immediately after linking grub-emu in other components, and it requires a bit of manual intervention to get the right things built in the right order, but with all of those caveats, it's enough. It works, and you can turn on things like ASAN, but getting there was hard, unrewarding and unpleasant. Let's consider alternative ways to solve this problem.

What I did when finding the bugs was to observe that we only wanted AFL to link in its extra instrumentation at certain points of the build process. So I patched AFL to add an environment variable AFL_DEFER_LIB - which prevented AFL adding its own instrumentation library when being called as a linker. I combined this with the older CFG instrumentation, as the PCGUARD instrumentation brought in a bunch of symbols from LLVM which I didn't want to also figure out how to guard.

This worked and it's what I used to find most of my bugs. But I'd probably not recommend it, and I'm not sharing the source: it's extremely fragile and brittle, the hard way is more generally applicable, and the easy way is nicer.

After posting part 1 of this series, I had a fascinating twitter DM conversation with @hackerschoice, who pointed me to some new work that had been done in AFL++ between when I started and when I published part 1.

AFL++ now has the ability to dynamically detect some duplicate symbols, allowing it to support plugins and modules better. This isn't directly applicable because we link all the modules in at build time, but in the conversation I was pointed to a linker flag which instructs the linker to ignore the symbol duplication rather than error out. This provides a significantly simpler way to instrument grub-emu, avoiding all the issues I'd previously been fighting so hard to address.

So, with a modern AFL++, and the patch from part 1, you can sort out this entire process like this:

Eventually it will error out, but ./grub-core/grub-emu should be successfully built first.

(Why not just build grub-emu directly? It gets built by grub-core/Makefile, but depends on a bunch of things made by the top-level makefile and doesn't express its dependencies well. So you can try to build all the things that you need separately and then cd grub-core; make ...flags... grub-emu if you want - but it's way more complicated to do it that way!)

Now that we can compile with instrumentation, we can use __AFL_INIT. I'll leave the precise details of how this works to the AFL docs, but in short it allows us to do a bunch of early setup only once, and just fork the process after the setup is done.

There's a patch that inserts a call to __AFL_INIT in the grub-emu start path in my GitHub repo. 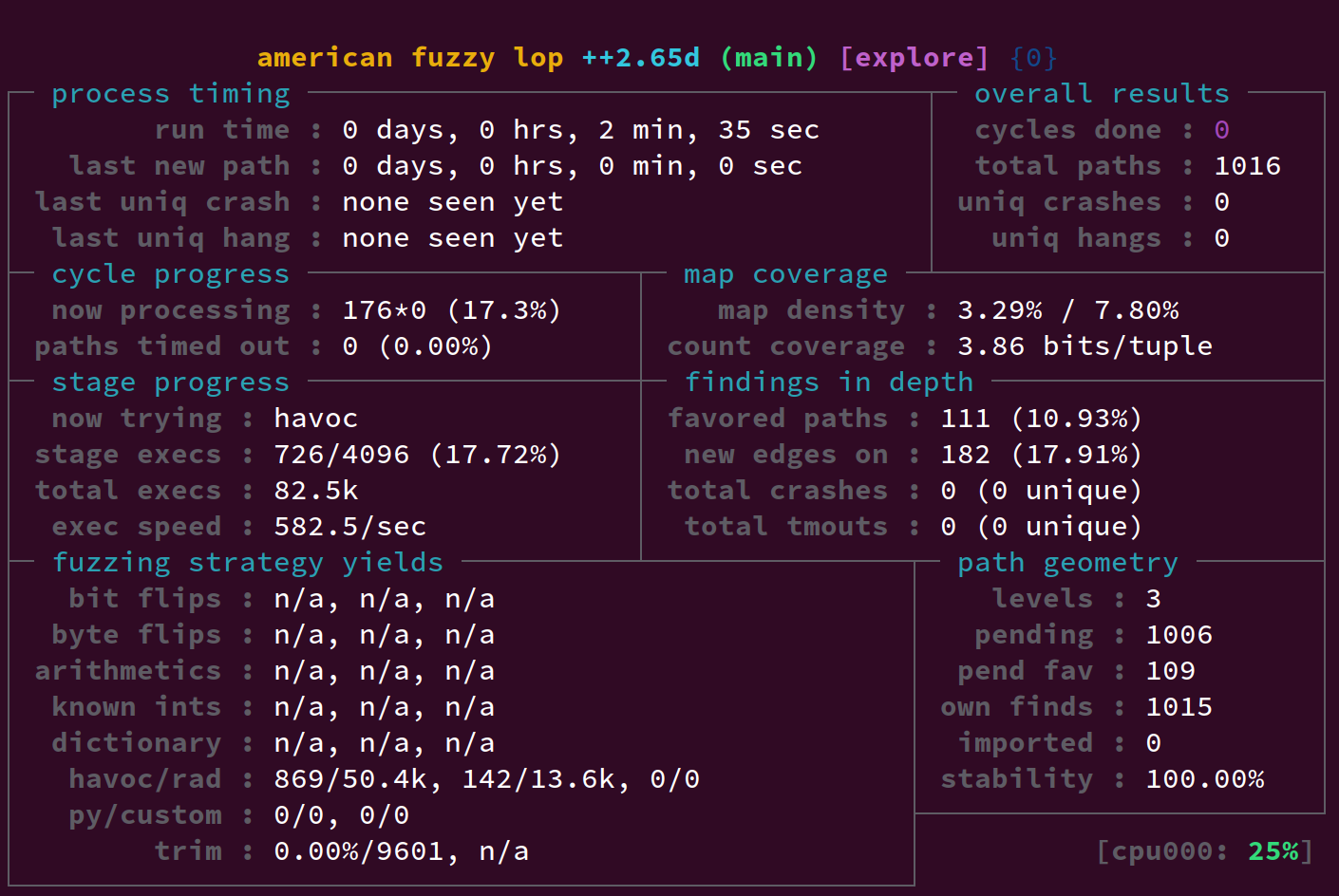 A 'sanitizer' refers to a set of checks inserted by a compiler at build time to detect various runtime issues that might not cause a crash or otherwise be detected. A particularly common and useful sanitizer is ASAN, the AddressSanitizer, which detects out-of-bounds memory accesses, use-after-frees and other assorted memory bugs. Other sanitisers can check for undefined behaviour, uninitialised memory reads or even breaches of control flow integrity.

ASAN is particularly popular for fuzzing. In theory, compiling with AFL++ and LLVM makes it really easy to compile with ASAN. Setting AFL_USE_ASAN=1 should be sufficient.

However, in practice, it's quite fragile for grub. I believe I had it all working, and then I upgraded my distro, LLVM and AFL++ versions, and everything stopped working. (It's possible that I hadn't sufficiently cleaned my source tree and I was still building based on the hard way? Who knows.)

I spent quite a while fighting "truncated relocations". ASAN instrumentation was bloating the binaries, and the size of all the *.module files was over 512MB, which I suspect was causing the issues. (Without ASAN, it only comes to 35MB.)

I tried afl-clang-lto: I installed lld, rebuilt AFL++, and managed to segfault the linker while building grub. So I wrote that off. Changing the instrumentation type to classic didn't help either.

Some googling suggested GCC's -mmodel, which in Clang seems to be -mcmodel, but CFLAGS="-mcmodel=large" didn't get me any further either: it's already added in a few different links.

My default llvm is llvm-12, so I tried building with llvm-9 and llvm-11 in case that helped. Both built a binary, but it would fail to start:

The same happens if I build with llvm-12 and afl-clang, the old-style instrumentation.

I spun up a Ubuntu 20.04 VM and build there with LLVM 10 and the latest stable AFL++. That didn't work either.

I had much better luck using GCC's and GCC's ASAN implementation, either with the old-school afl-gcc or the newer GCC plugin-based afl-gcc-fast. (I have some hypotheses around shared library vs static library ASAN, but having spent way more work time on this than was reasonable, I was disinclined to debug it further.) Here's what worked for me:

GCC doesn't support as many sanitisers as LLVM, but happily it does support ASAN. AFL++'s GCC plugin mode should get us most of the speed we would get from LLVM, and indeed the speed - even with ASAN - is quite acceptable.

If you persist, you should be able to find some more bugs: for example there's a very boring global array out-of-bounds read when parsing config files.

That's all for part 2. In part 3 we'll look at fuzzing filesystems and more. Hopefully there will be a quicker turnaround between part 2 and part 3 than there was between part 1 and part 2!